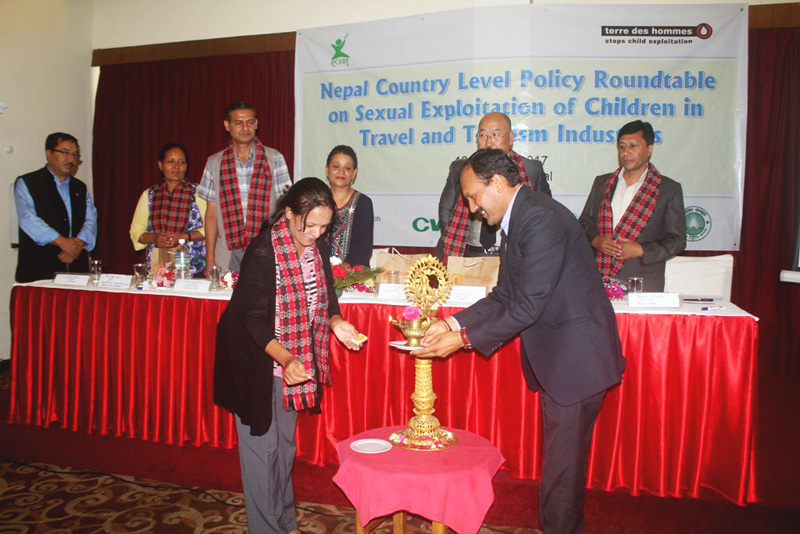 End Child Prostitution, Child Pornography and Trafficking of Children for Sexual Purposes (ECPAT) in Nepal (CWIN, Maiti Nepal and Shakti Samuha) and its Promoter Hotel Association of Nepal (HAN) in partnership with ECPAT International and TDH Nederlands organised an inaugural event for ‘Nepal Country Level Policy Roundtable on Sexual Exploitation of Children in Travel and Tourism Industries (SECTT)’ in Kathmandu on 16th June 2017.

The two-day programme was organised with the objectives of sensitising on the situation of Commercial Sexual Abuse of Children (CSEC) and identifying stakeholders in order to end CSEC and SECTT in Nepal.

Ms Sumnima Tuladhar, Executive Coordinator of CWIN Nepal welcomed all the participants representing the government line agencies, the private sector, civil society organisations and media houses. Meanwhile, she also made a brief presentation on the present situation of sexual exploitation of children in travel and tourism in Nepal.

Dr Chophel, Director General of SAIEVAC highlighted that a regional strategy is needed to combat this problem and gave SAIEVAC commitment to combat this issue.

MS. Durga Singh, Mr Bhuwan Prashad Acharya and Radhika Aryal also expressed their commitment to end SECTT. They also urged for the collective efforts to fight against SECTT, recalling that the Government of Nepal is committed to combating this issue and ensured their partnership with private sector and CSOs.

Mr Madhav Pradhan, President of CWIN delivered a vote of thanks and closed the inaugural session and wished that the two-day workshop will be very fruitful.